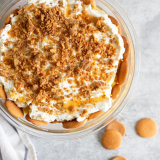 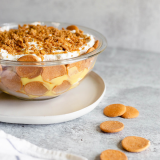 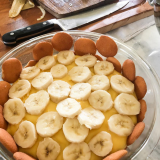 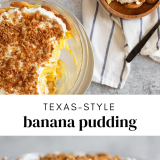 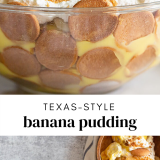 This Texas banana pudding is a creamy, cool dessert. It's easy to layer up and store in the refrigerator and the sweet crumble topping takes this Southern homestyle recipe to the next level!

Banana pudding has become one of my favorite desserts. It's the type of dessert you can layer up, make a big bowl of, and bring to a party. We actually bring this to a family gathering almost every year. And it's perfect for a summer bbq.

Or you can layer it up, make a big bowl of it, and eat all the banana pudding yourself at your house. Which is what we recently did, because yum. My waistline hates me for this, but my tastebuds are SO SO happy. It's worth the extra cardio.

I happen to think this is the BEST banana pudding recipe ever. Texas style or not. Just in general. It makes me think of the banana pudding I can get at Rudy's BBQ, but it's even better. Josh has spent years perfecting this recipe.

This southern banana pudding consists of layers of vanilla wafers, vanilla pudding, sliced bananas, freshly whipped cream, caramel drizzle, and a graham cracker crumble topping. It's all delicious, but that crumble topping just takes it to the next level.

Let's talk a little more about those layers!

Honestly, we just take a big spoon and scoop this Texas-style out of the bowl. And onto plates or into bowls. We usually have some of the crumble topping leftover, so we toss a little more on top and add a few more vanilla wafers once it's plated.

How to layer banana pudding:

Once you have all your ingredients prepped and ready, it's time to layer banana pudding!

Layer one... the vanilla wafers. You'll take out a big, glass bowl and start to add some to the bowl. You don't add them all up the sides, because they wont stay properly at this point. So you start with about how many you see below.

Then, you slice up your bananas.

Next, you add about ⅓ of the pudding to the bowl and ⅓ of the banana slices to layer.

Note - Even though you're layering this up two times, you only do a third of the mixture to start, because of course the bottom of the bowl is smaller than the top. So you'll use the remaining ⅔ for the top layer.

After the banana, and ⅓ of the whipped cream.

Next, drizzle on the caramel sauce in a criss-cross pattern. Then you'll add half of the crumble topping, and then start to layer again!

Top with the rest of the whipped cream and more caramel drizzle.

And then finally, add the crumble!

At this point, refrigerate it for at least and hour to firm up! Cover with saran/plastic wrap to store and keep leftovers in the refrigerator.

How long will the banana pudding keep in the fridge?

Less than a day because you'll eat it so quickly!

Seriously though, the banana pudding should keep for 2-3 days in the fridge. Just make sure to cover it with plastic wrap. 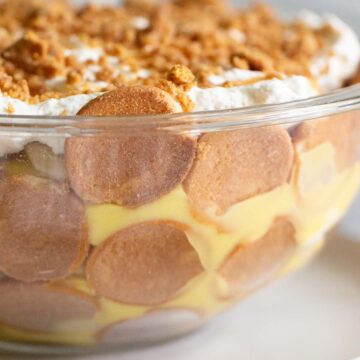 Recipe by Aimee
This Texas banana pudding is a creamy, cool dessert. It's easy to layer up and store in the refrigerator and the sweet crumble topping takes this Southern homestyle recipe to the next level!
5 from 2 votes
Print Recipe Pin Recipe
Course Dessert
Cuisine American
Servings 12

Tried this recipe?Tag @foodbanjo on Instagram and share your photos!
« How to Make Self Rising Flour
Gin Sour Cocktail Recipe »