This recipe for a ham and noodle casserole is a version of an Austrian or German dish called schinkenfleckel, or schinkennudeln. It's a delicious, creamy noodle dish that is a perfect way to use up any leftover ham!

My grandma made this ham and noodle casserole dish growing up and it was one of my favorite recipes she would make. I never thought twice about it, but as I've gotten older, I realized it has Central European origins. My grandma was of Czech heritage, and here in Texas we have a lot of Czech and German roots. So it only makes sense that a lot of recipes she cooked have origins in those countries.

I set out to make a version of it, and thankfully was successful, as she didn't leave the recipe behind (she passed away in 2004). I got some tips from my mom, and consulted versions of similar dishes on the internet.

Now, this recipe isn't your traditional schinkennudeln, or schinkenfleckel recipe. Because my grandma didn't make it in the traditional way. This isn't even my grandma's recipe, since I don't have that. But it's a take on the schinkenflecken. And I'm happy with it.

Schinkenflecken is a traditional Austrian ham and noodle dish. It's typically made with eggs, cheese, and sour cream. It forms a casserole that's a little eggy, a little creamy, a little cheesy, and a lot delicious.

This ham and noodle recipe is also considered German, as Schinkennudeln. This version doesn't use sour cream, and instead uses heavy cream. At least, these are things the internet tells me. (If true, my version and my grandma's version are closer to the German ham and noodle casserole).

My Americanized version is not traditional, but is based on these dishes. And it's pretty easy and delicious to make.

What type of ham to use:

I love to use thick ham slices. Leftover ham from Easter or Christmas is great in this recipe! However if all you can get is deli-sliced ham, you can use that too. It won't be QUITE as good, but still tasty.

What to serve with your ham and noodle casserole: 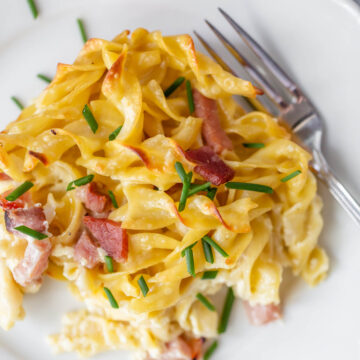 Recipe by Aimee
This recipe for a ham and noodle casserole is a version of an Austrian or German dish called schinkenfleckerl or schinkennudeln. It's a delicious, creamy noodle dish that is a perfect way to use up any leftover ham!
5 from 1 vote
Print Recipe Pin Recipe
Prep Time 5 mins
Cook Time 55 mins
Course Main Course, Side Dish
Cuisine American, austrian, German
Servings 8