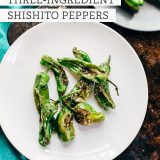 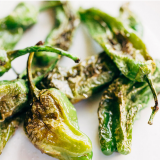 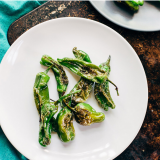 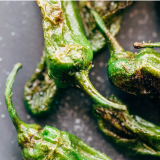 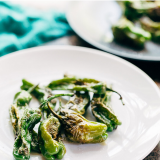 I think the first time I tried shishito peppers were at a restaurant. I can't remember which one, but I was blown away. Peppers that aren't really spicy? Peppers that are charred but retain such a fantastic flavor? Sign me up to eat these everyday.

You can eat them raw, but I prefer them blistered and cooked to perfection.

They are so easy to make, and so flavorful. The key to this recipe is to use sesame oil. It imparts such a unique flavor that adds to the tastiness of the peppers.

What are shishito peppers?

These small green peppers typically come from Japan, but thank goodness they've made their way across the globe. They are mostly mild and have a touch of sweetness, though about 1 in 10 is a little spicier (not too spicy!)

Where to find shishito peppers:

Trader Joe's is a great place to find bags of shishito peppers! They are in the produce section and typically come bagged.

You can also sometimes find them at Whole Foods, and always try your favorite grocery store. Asian grocery stores are also a fantastic place to check!

These peppers would be delicious dusted with bonito flakes in addition to the sea salt. Or just with a simple squeeze of lemon!

You can also serve with a dipping sauce, like a Sriracha mayo or lemon aioli.

Additionally, you could serve these blistered shishito peppers in a stir fry or just over rice.

How to make the blistered shishito peppers:

Making these shishito peppers is easy! In a wok, cast iron pan, or large frying pan, heat up the sesame oil and then add the shishito peppers. Stir frequently until peppers are blistered (about 10-15 minutes).

Plate the peppers, then sprinkle liberally with salt and enjoy! 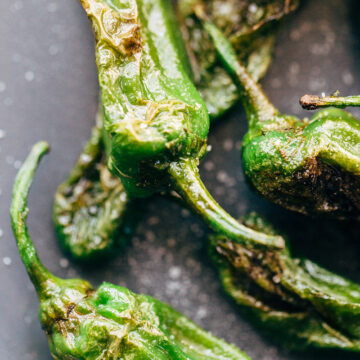 Love this recipe? Check out these!