Kiwi and cucumber pair together perfectly in this kiwi cucumber smoothie! It's so healthy and easy to make. It's a delicious green smoothie that is cooling and so refreshing.

A new take on a green smoothie! This one doesn't actually have spinach (unless you decide to toss in a handful). But it's still nice and green and tasty. I can almost picture myself relaxing at a spa while drinking this tasty smoothie.

This kiwi cucumber smoothie is the perfect balance of kiwi and cucumber flavors so neither outshines the other.

This smoothie only uses 4 ingredients.

Want to change up this smoothie or add some stuff? It's easy to customize! Here are some ideas: 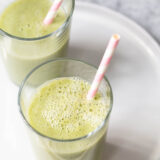