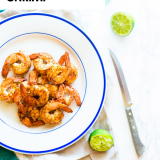 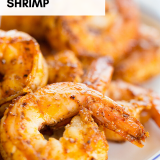 These chili lime shrimp are so easy to make. They can be eaten on their own or used in tacos, bowls, salads, soups, or pasta! They're a tasty and flavorful Whole30 shrimp appetizer.

I love quick lunches like this chili lime shrimp recipe that is Whole30-friendly! Cook up a bunch of shrimp, toss in seasoning, squeeze some lime on the top. Easy lunch.

I usually use frozen shrimp, because I always try to keep a bag in the freezer. But of course, if you can get fresh shrimp, even better!

If you're using frozen shrimp, the shrimp will need to be cooked for a bit longer. Scroll down to the recipe to see our notes on cooking from frozen.

The beauty of this chili lime shrimp recipe is that the shrimp can be enjoyed in so many different ways! Here are some ideas.

The fun thing about an easy recipe like this is that it's so easy to customize!

Love this recipe? Check out these!

How to make the recipe:

These chili lime shrimp are so easy to make! You just take out a skillet and heat it over medium heat. Add the olive oil to the pan and let heat for about 30 seconds. Then add the shrimp.

As the shrimp start to turn pink and opaque, flip the shrimp and cook for another 1-2 minutes. Add the chili powder to the pan and toss until shrimp is coated.

Plate, then squeeze half of a lime over the shrimp and enjoy! 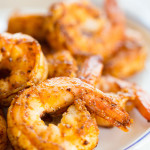 If cooking frozen shrimp, you can add them directly to the pan from frozen, but they will take an additional 5-7 minutes to cook per side as they thaw out in the pan and cook.   This recipe can serve 1 or 2 people, depending on how you use the shrimp! If you're adding to something else, it can serve two people. If you're eating on your own, it may just serve one.
Previous Post: « Kumquat Salad
Next Post: Chess Bars »