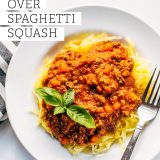 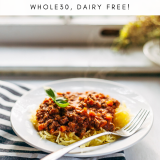 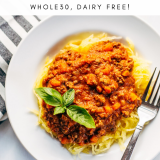 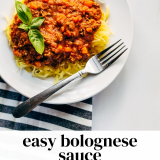 This Whole30 bolognese sauce is served over roasted spaghetti squash for a delicious dinner that is low-carb. It's flavorful and tastes so indulgent, you won't even miss the pasta!

When we did our Whole30 earlier this year, I found one of the easiest things was to alter recipes we make a lot, and just make them Whole30-friendly! Now, that doesn't work for all recipes, but it worked beautifully to create this easy Whole30 bolognese sauce with spaghetti squash.

Honestly, even when we're not doing a Whole30, I frequently serve this bolognese sauce over roasted spaghetti squash instead of regular pasta. It's THAT delicious.

You do want the sauce to simmer for awhile to cook down and develop flavor, so plan ahead if you're going to make this Whole30 bolognese! It winds up being pretty easy, because most of the time the sauce is just hanging out in the pot, simmering away. You may need to stir it here and there, but this is not a meal that will be ready in 30 minutes.

Regardless, it's worth it! We make this at least once a month, and it's so delicious. It's perfect for a flavorful paleo or Whole30 dinner.

What is spaghetti squash?

Spaghetti squash is a big yellow squash. The inside is stringy, so it forms spaghetti-like strands. You typically roast it in the oven, then form the strands with forks, and discard the skin. It makes a great low-carb pasta substitute.

What makes this Whole30?

This recipe is Whole30-friendly because it doesn't use dairy or pasta! Instead it uses non-dairy milk (like almond milk) and spaghetti squash instead of regular pasta.

How to prepare and cook a spaghetti squash

To cook a spaghetti squash, first you'll want to cut it in half. You'll do this lengthwise, so you're cutting through the stem. Similar to how you would slice an apple in half. Spaghetti squash can be really hard to cut through, so you want to use a big, sharp knife. We have this one.

Once you're able to cut through it, the next step is to remove the seeds. You can do this with a kitchen spoon, but I've found the easiest way is actually with an ice cream scoop. Something about the ice cream scoop lets me easily get all those seeds out.

Then flip over once they are out of the oven, so you can make the spaghetti squash strands!

Look at that steamy, roasted spaghetti squash. So much love for this veggie.

Make the spaghetti squash strands by taking two forks and fluffing the squash insides to create those strands.

Top with your cooked bolognese sauce and do a happy dance.

There it is. The plated dish of Whole30 bolognese with spaghetti squash. Delicious, filling, and healthy. And low-carb!

Honestly, I think I prefer this to a pasta version. (FYI, still pairs GREAT with some red wine if you're not doing a Whole30!) 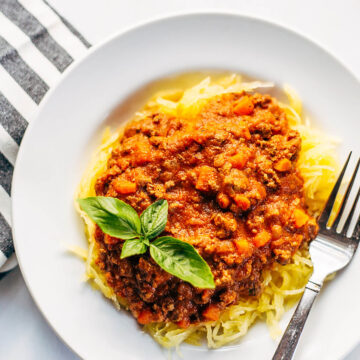 Other dinner recipes to love: