This recipe for homemade cinnamon whipped cream is so delicious and easy to make. Use it to top coffee, waffles, pancakes, apple pie, or any other dessert!

For the first time in many many days, I don't think it got above 90 degrees here. And that means fall is right around the corner. And I am here for it. And I'm celebrating with this homemade cinnamon whipped cream.

Not going to lie. I actually used this recipe to fancy up some frozen waffles. Have you ever had waffles with some homemade cinnamon whipped cream on them? If not, you must try it!

And then I had some of the whipped cream leftover, so I also used some to top my coffee. Talk about a fancy morning over here.

How to make the whipped cream:

Making the cinnamon whipped cream could not be easier. Place all the ingredients in the bowl of your stand mixer. Or, if you're using a handheld mixer, just a bowl.

Mix, mix, mix until it's the desired consistency. I like smooth and pillowy. You don't want to mix it so much that you get butter, so watch it carefully!

How to get the perfect whipped cream consistency:

Really, it's a matter of figuring out what consistency you're going for. Do you want something really soft or a bit more firm?

This cinnamon whipped cream can help elevate SO MANY foods. Here are a few ideas. 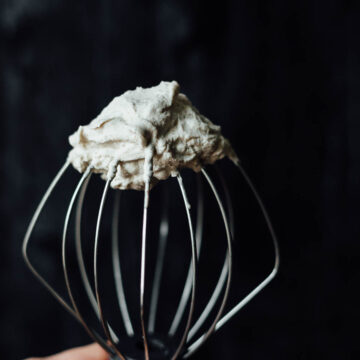