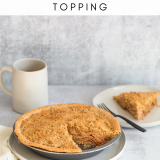 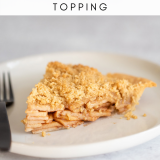 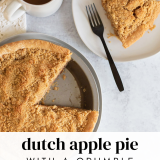 This Dutch Apple Pie has a sugary, buttery, crumb topping that is so delicious. This recipe is easy to make and you can use a store-bought pie crust or a homemade one! Either way, this is a simple one-crust pie to make.

Can I confess something? I don't really like typical apple pie. I don't know why. However, this Dutch Apple Pie recipe is one of my favorites? I'd eat this everyday.

This apple pie is so tasty. And surprisingly easy to make! My mom makes this recipe several times a year. One of those times is Thanksgiving. And even though I'm always so stuffed from all the other delicious food, I always have to eat a slice (or two!) of this pie.

If you're wondering what makes the dutch apple pie different than other types of apple pie, it's that crumb topping. That's also what makes it so easy to make! Instead of trying to put another crust on top and make it fancy, all you have to do is sprinkle the crumb topping on the apple filling, and it makes for a buttery, sugary, delicious pie.

What type of pie crust to use:

For the crust, I typically use store bought. While you can make your own, I never have the time. For the crust, I use the kind that you can find in the refrigerated section of the store.

In my local grocery store, they are next to the biscuits. At Trader Joe's I've seen them in the freezer section next to the desserts. For those types of pies, you roll out the dough and then press them into a pie plate.

You can also get the type of crust that is already in the tin. That makes it even easier. Those are typically in the freezer section close to the frozen pies.

Just make sure to look at the instructions on the pie crust before you start! The one I used said to leave out at room temperature for 15 minutes before rolling out.

What type of apples should you use?

My mom always uses Red Delicious. I chose to use Gala apples for mine. Either works! Other kinds or apples will work too. Some people swear by Granny Smith apples or Golden Delicious apples for apple pies, but I always prefer to use red apples.

How to make the crumb topping:

To make Dutch apple pie topping, mix the softened butter, flour, and brown sugar together until they get all crumbly. You can use a fork or your hands. If you really want to be fancy, you can use a mixer, but don't mix too much. You want some larger pieces in there and you don't want it to be too fine of a mixture.

How to make the Dutch apple pie

Peel the apples, and then slice them thinly. You can definitely do it by hand if you'd like. I wound up using a mandoline slicer. If you go that route, be careful! The blades on those are incredibly sharp. I always use the provided tool so I don't cut my fingers.

Once you've sliced the apples, toss them with some sugar and cinnamon. Yum. (I had some apples left over that didn't fit in the pie, and I definitely stood at my counter eating them. No shame here.)

Then the crumb topping for the Dutch apple pie. The thing that makes it special! Take softened butter, flour, and brown sugar, and then mix them all together until they get crumbly and combined. I use a fork to do this. You can also use your hands.

Then you just assemble the pie. Press the pie dough into the pie pan or pie dish.

Add the apple mixture to the pie, spreading them out until the apple is filling the pie.

Next, add the prepared crumble topping to the pie. Then bake in the oven until golden and delicious.

Cool the baked pie, then serve as desired.

What to serve with the Dutch apple pie

Love this recipe? Try these!

Recipe by Aimee
This Dutch Apple Pie has a sugary, buttery, crumb topping that is so delicious. It's easy to make and you can use a store-bought pie crust or a homemade one! Either way, this is a simple one-crust pie to make.
5 from 1 vote
Print Recipe Pin Recipe
Prep Time 15 mins
Cook Time 45 mins
Total Time 1 hr
Course Dessert
Cuisine American
Servings 8 people
Calories 358 kcal