This cinnamon simple syrup is made with ground cinnamon for an easy recipe. Cinnamon syrup is a delicious ingredient in cocktails, mocktails, and coffee drinks!

Lately I've been experimenting with a lot of different simple syrups. I love how you can use them in so many ways! And I love cinnamon, so making a cinnamon simple syrup seemed like a no brainer.

I also wanted something that was easy to make with ingredients I always have at home. And I ALWAYS have ground cinnamon. So I decided to make this cinnamon syrup using ground cinnamon.

And if you're okay with that, then great! I personally don't mind. It doesn't affect the flavor of drinks, in my opinion. And it's so easy to make. It means you don't have to keep cinnamon sticks on hand. I just like to shake the jar before using to make sure any ground cinnamon is nicely distributed.

What type of sugar should you use?

You can use whatever type of sugar you like! I used white granulated sugar to keep things simple. You can use raw sugar as well. While you can use brown sugar, you may want to use half brown sugar, half regular sugar. If you use all brown sugar, it can overpower the cinnamon flavor.

How to use cinnamon syrup:

Cinnamon simple syrup can be used in a variety of ways!

Other recipes to love:

How to make the cinnamon simple syrup:

First, get your ingredients ready! Measure out a cup of sugar, a cup of water, and half a teaspoon of cinnamon.

Next, add all the ingredients to a pot and bring to a boil, stirring occasionally.

Once boiling, reduce heat and simmer over medium-low heat for 10-15 minutes, stirring occasionally.

You can see the dark, rich color. Let cool, then pour into a jar, place the lid on the top and store in the refrigerator for up to two weeks. 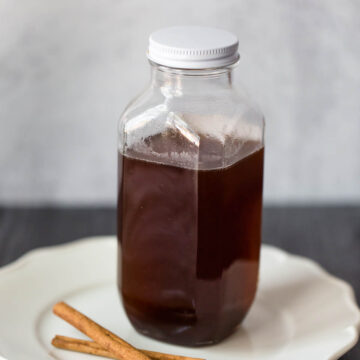