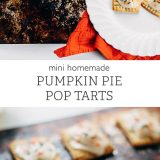 I don't know what better way to kick off autumn than with some homemade pumpkin pie pop tarts. Remember the easy pop tarts I made? I just had to make a pumpkin pie version of them! They really do taste a lot like pumpkin pie, but look a LOT cuter. Especially in mini versions!

However, you can make these pumpkin pie pop tarts in any size you want. I like doing mini versions for this recipe, which wind up being slightly bigger than 3 inches by 2 inches. I wouldn't recommend making them much smaller than that, because it will be hard to get a good amount of filling in there while still getting the edges closed.

This recipe should make quite a few pop tarts (depending on which size you make them). If you want to only use half of the can of pumpkin, halve the recipe!

Looking for other fall dessert ideas?

Making these homemade pop tarts are pretty easy! First, make your your pie crust is thawed. Then, preheat your oven and get started on the filling!

Mix together your canned pumpkin with the brown sugar, cinnamon, nutmeg, allspice, cloves, ground ginger, and salt. Mix until it's all combined.

Take a large sheet of parchment, and roll out a piece of pie crust. If needed, roll slightly thinner. Cut the pie crust into equal sizes of rectangles, depending on how big you want to make the pop tarts.

Then, you'll take a piece of pie crust, put a spoonful of filling on it, then top it with another pie crust. Try not to put too much filling inside or it will escape and won't close properly! Press on the edges with a fork to seal the pop tart so the filling doesn't escape. Then, poke a few holes in the top with a toothpick. Keep repeating until you have a tray of these ready to pop into the oven to bake!

Once the pumpkin pop tarts have baked, place the pop tarts on a wire rack to cool. Mix up the powdered sugar, milk, and vanilla extract in a bowl to form the glaze. Spoon a little glaze over each pop tart, then top with sprinkles. 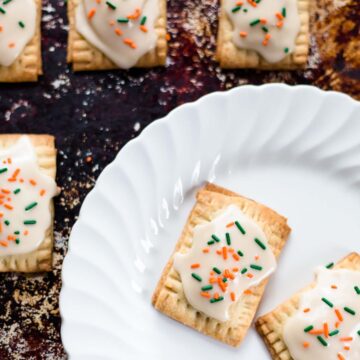